Semmozhi Poonga - The Greenway in the heart of Chennai city 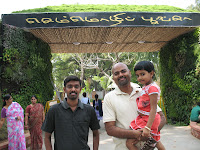 Spectacular landscapes, vibrant fountains, and colorful gardens - these are some awesome features of our newly inaugurated Semmozhi Poonga. If you are in Chennai and want to kill a couple of hours, Semmozhi Poonga is the place to go to.  The park is conveniently located at the heart of Chennai city, near Anna/Gemini Flyover and US Consulate.

The park was opened to the general public a couple of months ago and it continues to be fresh, clean and beautiful. The park has several features attractive enough for kids, adults (especially, couples & group of friends), and elderly people. The entrance fee is very nominal - Rs.5 for adults and free for kids under age 10. Folks who want to do their morning walk in the park can pay Rs.150 per month. The park is open on all the days, between 6 am - 8 am for morning walkers and 10 am - 8 pm for the general public. There is no extra fee for photo cameras/camcorders.

The entrance to the park has an arch with a vertical garden, which is an attention grabber. There are vibrant fountains at the entrance, welcoming you with a smile. The water coming out of the fountains resemble the party logo of the ruling government. There is a security guard checking the visitors to make sure that they aren't carrying any eatables or plastic. Some of the folks still manage to sneak-in snacks and other eatables in plastic covers.

The gardens are maintained very well. I saw a number of workers landscaping, mowing, fertilizing and watering the plants. There were plants and trees from various part of the world. The whole place looked as-if it is covered by a green blanket. Though Semmozhi Poonga is in the middle of the city, it was relatively calm, peaceful and filled with fresh air. The walkways are designed to meet the needs of morning walkers. They are well-laid and clean. The park has a man-made waterfall, which looked very natural. The ponds were filled with "Ujala whitened" ducks.

They have deployed 'police women' in large numbers - I saw at least 10 or 15 of them, in the park. Majority of them were just "chit-chatting" or "glued to their mobile phones".


The park has wonderful play structures for kids and many of them are on-par with what I've seen in US. No wonder why there were many kids from different schools, picnicking there. The school teachers had a tough time to manage the enthusiasm and excitement of the kids. The kids behaved as-if a hungry man saw food, after days of starvation. It was absolutely impossible to control them. They were climbing over all the play structures. The whole play area looked like a beehive filled with bees. (Also read: Mahabalipuram, Muttukadu & Crocodile Park)

The play area is restricted for kids under age 10. However, I noticed that several elderly kids (10+) were playing there with excessive enthusiasm. I did try telling a few elderly kids "not to play on the play structures as they were meant for smaller kids and the structures may break if the elderly kids use them". However, none of them seem to be listening.

At first, I complained to the police women... but they escaped easily by saying "Sir ! We are deployed to safeguard the place against drunken folks and miscreants. It is hard for us to control the kids. You should complain to the officials in the administrative department". I went to the administrative office and complained to the personnel there. The administrative personnel said "Sir ! We have been telling the elderly kids and parents about this. But, it is hard for us discipline them. The signboard clearly says that the play area is for kids under age 10. But, none of them seem to follow the sign. Thanks for your complaint. We'll see what we can do". I'm sure nothing is going to change - but, I had a satisfaction that I did my job. (Also read: If I don't care, who will care?)


In general, Semmozhi Poonga has good infrastructure for visitors. There are several benches for people to sit and relax. There is abundant parking space for cars and two wheelers. The restrooms are in good condition. The park maintains its cleanliness by not having any eateries and by not allowing hawkers. There are trash-bins in many locations inside the park. (Also read: A visit to Arignar Anna Zoological Park - Vandalur)

Overall, I liked the few hours that I spent in Semmozhi Poonga. It show cases our Tamil Nadu government's passion to create parks in several areas inside the city. I wish the park continues to be maintained very well, in the coming months/years also.
at January 30, 2011