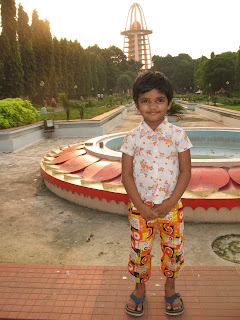 Recently, I had been to the Anna Tower Park (also called as Dr. Visveswaraya Park), in Anna Nagar. The park was simply gorgeous. The dense trees giving a fresh green cover, the chirping birds, colorful playing structures, well-laid walkways, sound of the fountains, ponds filled with lotus flowers, and the majestic tower ... made the place to look like heaven. Anna Tower park is a boon  for folks who want to spend their evening hours. The last time I visited this park was nearly 10 years ago. It was in a pathetic situation, then. Thanks to Chennai Corporation's increased interest in constructing, renovating and maintaining parks in Chennai. Anna Tower Park looked very young and colorful.

The 135ft tower in the center of the park, painted in fresh orange, is an eye catcher. I was curious to take a peek at the Chennai city from the top of the tower. However, access to the tower was closed. I was told that the access is restricted due to increased suicides and "pairs" using walkways as a "hangout" place.

The entire park was very busy - folks who are exercising, readers who are buried into their books, students hanging out with their friends, elderly couples chit-chatting, families relaxing, and kids playing. Despite the "busyness" engulfing the park, everyone gets their privacy.

The park had a meditation court, a small pond, kids play area, walk-ways and grass land, an arena for dance/music, cricket pitch, skating rink, and water fountains. In the night, they switched-on fancy lights, which made the entire place to look very colorful. The park also had well maintained rest room facilities. There is enough parking available along the road side for both two wheeler and cars. There is also a constable standing outside the park, to maintain some order. (Also read: Semmozhi Poonga - A Greenway in the heart of Chennai)

It looks like kids are taught "skating" lessons in the mornings and evenings in Anna Tower Park. Also, the park is used for hosting week long annual celebrations of "Chennai Sangamam", a Tamil cultural festival. You can easily spend two or three hours in the park. There is lots of entertainment for kids. Adults can also spend time peacefully in the park.

Anna Tower Park is definitely a boon for the residents in and around Anna Nagar.