New Hampshire trip totally changed my perception towards fall colors. I've seen fall colors only in pictures. I used to think that the fall colors 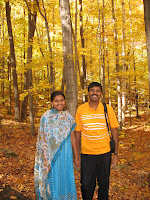 shown in pictures are exaggerated and artificially colored using some software technology. Well, my perceptions were proved to be wrong during the New Hampshire trip.

We reached Manchester airport (MHT) on 11th Oct in the morning. The arial view from the flight was awesome. It appeared as-if someone sprayed colors all over Manchester. Fall season was at its best. I rented vehicle from Alamo (the rental facility was located within the airport. You can walk down to the rental car parking area). We headed to Boston, to visit my wife's relatives. You could see fall colors everywhere, even along the side of the highways. It was hard for me to resist my temptation to pull over and take some pictures along the road side. It took us about an hour and a half to reach Boston. We reached Boston at around 12.00 pm. We had a delicious lunch. We stayed there for a few hours and went to Rhode Island. We reached RI by around 6 pm. We wasted nearly an hour trying to find my friend's house in RI (Google Maps screwed-up as always!). We had a heavy dinner in my friend's place. My family & my friend's family left RI to Vermont. We reached our hotel (Yankee Village Motel), in Ascutney, VT by mid night. It was a decent hotel.

We got up early and vacated the hotel. We had our breakfast in one of the (actually, the only) mom & pop fastfood restaurants in that area. We first visited Ascutney State Park. It was just a few minutes drive from the place we stayed-in. The park was very beautiful than I had anticipated. Most of the trees had pale yellow colored leaves that were glittering in the sun. We spent about an hour there. We then went to visit Jenny Farm. Jenny Farm is one of the famous 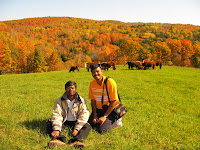 photo shoot spots. You can see several artists & professional photographers there. It is a must-to-see place in Vermont. We spent about an hour there and took some nice pictures.

We left Jenny farm to go to Woodstock. Woodstock is a very busy town. There were lots of places to shop & lots of activities going on in that area. We parked our car in Marsh-Billings-Rockefeller farm. We had our lunch there. My friend's wife had prepared lunch for all of us. It was so good to eat home-made food in the park. After having our lunch, we walked to a waterfall that was nearby. We spent sometime there and then left to Quechee Gorge.

Quechee Gorge was about 45 minutes (?) away from Woodstock. We reached there by 4.00 pm. Surprisingly, they didn't have any entry fee :) The Gorge looked OK. It was not all that great. The hike to the bottom of the Gorge was nice. We took a few pictures there. There is a miniature golf facility opposite to Quechee Gorge. We watched people playing m.golf for a while. Then we started our drive to Plymouth, NH. It took us about an hour and a half to reach Plymouth area. Most of the places along the highway was deserted. Plymouth had some decent population. I was surprised to see Walmart, Burger King etc in Plymouth. We stayed in Red Carpet Inn & Suites, 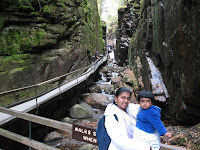 Plymouth for that night. It was a good hotel (complimentary breakfast was not all that great).

We got up early, had our breakfast in the hotel and went to White Mountains area. Kancamagus highway was gorgeous. You see colors almost everywhere. We first visited Flume Gorge. Flume Gorge was majestic and beautiful. The hike was a bit demanding (especially, when you carry a 2 year old kid on your arms :)). We spent about an hour there. We then had several stops along Kancamagus highway. There were not many great options for dining in that area. We grabbed sand 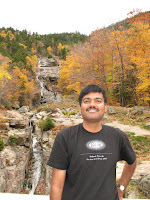 wich along the way. We reached Cog Railways by around 2.45 pm. It was amazing to see the steam engines pulling carriages over the steep Mt. Washington. We concluded that our Dodge Caravan isn't fit enough to take us to the top of Mt. Washington. We decided to return back to Rhode Island.

The commute to Rhode Island took nearly 4.5 hours. We had dinner at my friends place. We slept for about 5 hours, woke up at 2.00 am, got ready and drove to MHT airport. We reached Mancester by around 4.45 am. We had about 2 hours for the flight. We boarded the flight at 6.45 am and reached SJC by 11 am.

This was a very relaxing trip. We didn't do lots of driving. We had time to admire the nature.

(Note: It is hard to find an accomodation in Vermont/New Hampshire during fall season. I would recommend anyone planning for a trip during the peak fall season to book your tickets in advance. You can look at my NH-Vermont trip planner, for the places to see.)
at November 02, 2008 No comments: