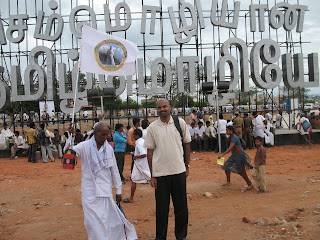 I didn't get a chance to write in a long time. There were lots of exciting things happening at personal, work & social life. Hardly found time to even breathe :) So, expect to hear a lot from me in the following weeks/months. I decided to do a post on my visit to Coimbatore to attend the World Classical Tamil Meet (aka Semmozhi Maanadu), last month.

I wasn't sure if I would get any train/bus tickets because of the last minute trip. To my surprise, there were tickets available in popular travels such as KPN & Parveen. I booked my trip through Parveen travels and reached Coimbatore on the 2nd day of the Tamil Meet. I reached Gandhipuram and rented a hotel room for an hour, to get ready. I got ready, had breakfast and took a bus from Gandhipuram bus stand to Codissia. There were several special buses to Codissia (bus fare Rs.9). I reached the Tamil Meet venue by 9.30 am or so.

The whole city had a festive look. The roads were neatly laid; walk ways were built on both the sides of the road; bus stops had proper shelter; temporary rest rooms were available along the roads; the walls on the highways were painted to indicate the classical Tamil culture & heritage. The venue also had all arrangements to accommodate the massive turnout of people. The venue had proper drinking facilities, clean restrooms with water, lots of options for dining and enough security arrangements. There were policemen deployed in large numbers along the highways and in the venue. (Also read: Traveling near restrooms isn't fun)

The weather on the 2nd day was also very pleasant. I visited the "Iniyavai Narpathu" tableaux, first. It was spectacular. The artists had done a stupendous job in crafting those tableaux. Then, I spent some time under the shyamiyana watching a dance performance by Lawrence's troupe.

Though the meet was dominated by DMK party cadres & pro-DMK tamil enthusiasts - there was enough things for other people to enjoy, too.

The 2 key exhibits (Ancient articrafts exhibit & Internet exhibit) were opened only on the second day. People had gathered in large numbers in front of the exhibits. This was my first time in a huge crowd like that and the experience was simply amazing. There was hardly any space for even breathing and you get pushed/pulled in all directions. Surprisingly, there were families with kids in the crowd and they were getting crushed. Policemen were trying to do their best in controlling the crowd - but in vain. After waiting for nearly an hour, I got entry into the exhibit. I liked the exhibit that had collection of ancient articrafts. Internet exhibit just had a bunch of stalls trying to promote/demo their Tamil software.


For lunch, I went to the 'subsidized lunch stall'. For just Rs.30, they served two rice varieties, 1 bottled water, 1 laddu, chips & pickle. I heard that the other 2 lunch stalls had more options and were pricey.

As time went on, people started to pile up in large numbers. The whole Tamil Meet venue was flooded with people, mostly the localities from Coimbatore. I was wondering what would happen, if there is an emergency situation and how would people evacuate from the venue. I was in the Tamil meet venue until 4 pm and started heading back to the bus stand to catch my bus to Chennai. It was hard to find a public transport to get to the bus stand. I was afraid that I have to end up walking 3Kms. Luckily, I managed to get hold of a 'share auto' which charged Rs.100 for a ride (shared by 3 people). I took a couple of hours nap at the bus stand and boarded by bus at around 7 pm. (Also read: Share autos - boon or bane?)

Tamilnadu government had spent crores & crores of money on this spectacular event. The arrangements for the event were flawless and there was a huge turnout of people. However, I'm still wondering whether the event was conducted for really promoting Tamil or it was just a DMK party get together/publicity campaign.