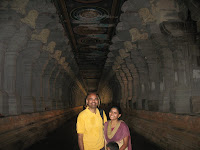 Last week, I had been to Rameswaram with my extended family members (nearly 15 people). Rameswaram is not only a popular destination for South Indian pilgrims but also for North Indians because of its historical significance. I was eagerly waiting to see various places in/around Rameswaram, because of their legacy. (Also read: Rameswaram & Danushkodi Trip Planning Tips)

We took Rameswaram express from Chennai (at 5 pm) and reached Rameswaram early in the morning (at 4.30 am). We did a mistake of not booking hotel rooms in advance. The roads around the station weren't maintained well and there were hardly any hotels, near the station. Looks like people/devotees typically stay closer to the temple. We took 4 autorickshaws to go near the temple to look for rooms. Rameswaram isn't a developed city, despite the huge crowd that visit the temple city everyday. 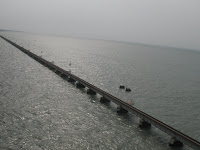 We managed to find an accommodation in Siva Lodge near the temple (for Rs.500 per room which can accommodate 4 - 5 people). We dropped our luggage in the hotel room, took a short break and went to the sea to take the holy dip. I was surprised by the quality of sea water in the location where people take the holy dip. It is heavily polluted because of the crowd.

Rameswaram Temple was not maintained very well. There were broken pillars, peeling cement/paint layers, and spider webs all around the temple. The exteriors of the temple are painted well. The 'moondram pragaram' had a number of pillars on both the sides of the walkway for nearly 1200m. The view was simply amazing and a feast for cameras. 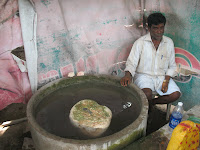 We went back to hotel room, took rest and hired a couple of Maruti Omnis to take us around the city. They took us to the 'famous spots' in the city and charged us a hefty Rs.1000 per van, for 3 or 4 hours of ride. The places they showed us include such as Ramar Theertham, Setha Theertham, Lakshman Theertham, Ramar Patham, House of Kalam (view from the street), and Kothandaramar temple, Floating Rock, Pamban Bridge and Jothilingam temple. We had lunch at Hotel Aryas in Goswamy Madam. The food quality was good. We finished the tour and came back to hotel by around 6 pm. We spent the rest of the day in the hotel. The breeze from the sea nearby was very pleasant and hence many of us decided to sleep on the corridor of the hotel room for the night. The corridor had an open balcony from where you can get the ocean view. 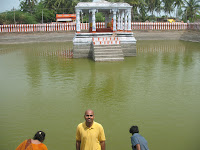 Certain pockets of Rameswaram is well developed, but majority of the city isn't maintained well (including the streets near the temple & the roads near 'House of Kalam'). The restaurants near the temple aren't adequately staffed and there is a long waiting time to find seats. Majority of the people who visit Rameswaram include old people and people of middle/low income category. So, the commercial establishments are targetted at such customers. If you are expecting 'luxury' you'll be disappointed very much.

Email ThisBlogThis!Share to TwitterShare to FacebookShare to Pinterest
Labels: Places to see in India