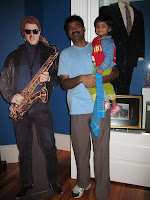 We started our sight seeing with Central High School. It is located in a residential locality. They have a visitor center close to the school. The school was very majestic and has a historical importance. It looks like the school is being used even today. We spent an hour in that area and then went to see the State Capitol Building. After spending sometime there, we went to the Old State House Museum. It has a good collection of items used by famous people from Arkansas. Of course, Bill & Hillary Clinton dominated. The entry was free.

We then went to the Riverfront Park. Little Rock is not a 'little' city. The name was quite deceiving though. The Riverfront area was quite busy. You can walk down the Big Dam Bridge and take a Trolley tour of the city. My wife & daughter spent about an hour in the Children's Discovery Museum. My daughter liked it very much. The Riverfront park has a lot of play areas for kids. You can spend nearly 1/2 a day in that area.

We drove to Oklahoma City and stopped at Fort Smith, AR on the way. We visited the Fort Smith National Historic Site that served as a Jail & Execution Chamber for the Indians, during 'those' days. We spent an hour there and headed to Oklahoma City.
at January 12, 2009