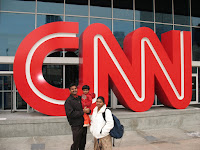 We had our breakfast and went to Atlanta Botanical Garden. This was reasonably good, even in winter. We spent nearly 2 hours there. There was a kids 'discovery' area in the park. I believe, the Garden would be at its best in Spring/Summer. There is also a small train ride ($2 charge). The conservatory had a number of tropical and desert plants.

We had our lunch and went to Atlanta downtown. The downtown was quite busy and a bit more spacious than other downtowns. We parked our car for $10 in the Georgia World Congress Center. There were cheaper parking areas available closer to the Centennial Olympic Park. We walked to the CNN Center. The CNN tour was closed for that day. We were disappointed. The CNN Center was HUGE and beautiful. I wish we were allowed to take the tour. There is a food mart in the first floor and many folks were sipping their coffee and watching news on the huge flat screen. 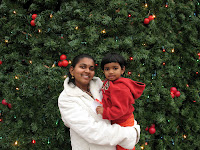 We then spent some time in the Centennial Olympic Park. They had a very tall Christmas Tree in the center of the park. There was a also skating area in the park, that was quite busy. They had a musical water fountain which was a attraction for kids. We spent about an hour in the park and went to World of Coca Cola.

You should learn from Coca Cola about how to charge people for advertising your brand. World of Coca Cola is a brand building center for Coca Cola. They had a number of age-old Coca Cola advertising posters and artifacts. There is also a demo of Coke manufacturing process. You get to taste 65 different varieties of Coke products across the globe. It was quite amazing to see that Coke has THAT many flavors. You can also carry a complimentary Coke bottle to home, at the end of the self-guided tour. We spent nearly 1.5 hours there.

We headed to Birmingham for our night stay. We stayed in the same hotel that we stayed on the 22nd night.
at January 12, 2009