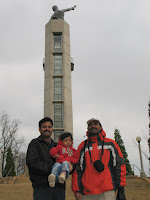 We had a good sleep. It was very windy and cold in Birmingham. We got ready, had our breakfast and left hotel by 8.30 am. We also washed our clothes in the hotel laundry facility. We went to the Temple of Sibyl in Vestavia Hills. It looks like this is a replica of the Sibyl Temple in Rome, Italy. We spent a few minutes there and went to the Vulcan Park. Vulcan Park is a nice and calm place in the busy city. We spent about an hour there, learning about Birmingham's history. From the top of the Vulcan building, you can get a glimpse of the whole city. It looks like the Iron Industry was so popular during the WWII times.

We then went to the Civil Rights Museum and learned about the atrocities that the black has gone through in America. The treatment of black people was quite similar to the treatment of the 'untouchables' in India. They've renovated the museum and the artifacts are really good. We also spent sometime in the park opposite to the Civil Rights Museum.

We then had our lunch and went to Desota Caverns Park. It was about an hour drive from Birmingham. There were hardly any people there. They had lots of play structures too. They charged about $18 per person. It is a very old cave and most of the cavern formations are dormant. But, the cavern was HUGE. They had a musical light/water show about Jesus Christ inside the cavern (after turning-off all the lights). That was well done. The chocolate fudge served in the visitor shop was delighting. We, in fact, bought 1/4 pound of fudge and I ate most of it :)