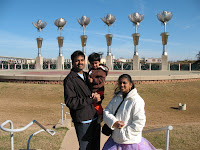 We had a very nice sleep and got a bit early, today. We had our breakfast and left hotel by 9 am. We first went to the Gardens of the American Rose Center. But it was also closed for the winter :)

We then went to Barnwell Memorial Garden. We spent nearly 2 hours in that area. We went to the Eldorado Casino and spent sometime there (Hey! I made $1.50). There was a Riverview Park near to the memorial garden. It was a bit cold, there. It looks like there will be cruise ships during the regular season. We had our breakfast also in that area.

We then went to see "The Duck Pond". The Duck pond wasn't that attractive. But, there were lots of play structures for the kids. My daughter had an amazing time there. She almost climbed on all the play structures. There were also lots of picnic tables. It is a nice place to spend the afternoon.

On the way to Jackson, Mississippi, we stopped at Monroe. We went to Biedenharn Museum & Gardens. This place was beautiful. It looks like people will visit this place for taking professional wedding photos. We spent about an hour and a half in this place.

We visited the Aviation Historical Museum of Louisiana. It is a small-renovated musuem that houses lots of World War II aviation pieces. There were no huge aircrafts, so we were a bit disappointed.

We had our Starbucks coffee in Pecan Land Shopping Mall. My daughter went on the carousel and she enjoyed it.