A visit to Children's Park & Snake Park in Guindy, Chennai 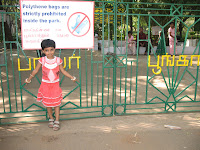 If you have kids at home and want to keep them occupied for half a day, you should consider visiting Children's Park & Snake Park in Guindy, Chennai. We visited Guindy National Park last week and had a great time there.

Guindy National Park consists of Children's Park and the Snake Park. There was a time when Children's park used to be filled with a variety of animals. However, today it looks almost deserted. There are only a few animals in the park, such as monkeys, turtles, crocodiles, peacock, and deers. Though the park was running short of faunas, it is rich with flora. The whole area looked like a dense forest. The trunk of the trees have grown large - indicating that they're there for several hundreds of years. There were a couple of banyan trees also in the park.


One thing worth mentioning is the play structures in the park. The park had a good collection of play structures for kids. The play area was filled with joy, vibrancy and noise. It was nice to watch the kids playing with full enthusiasm.

We then went to the Snake Park which was nearby. The Snake Park is maintained very well. It had a good collection of pythons, cobras, and a variety of other snakes. The park has a collection of snakes that live in land, and also the ones that live in water. In addition, the park had crocodiles and turtles. My daughter enjoyed watching them all. The locality was maintained very well - neat and clean. We were lucky enough to see the live show of snake (at around 3 pm).

My daughter enjoyed the visit to Guindy National Park, more than us.

Email ThisBlogThis!Share to TwitterShare to FacebookShare to Pinterest
Labels: Parks, Places to see in Chennai, Zoos