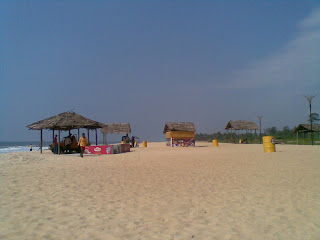 I had been to Mangalore a few weeks back to attend a wedding. The wedding happened in TMA Pai Convention Center. My friend & I stayed in Hotel Deepa Comforts, near the convention center. After the wedding, I had a few hours before catching the return flight to Chennai. My friend and I decided to go out and spend a few hours. (Also read: Night stay in Bangalore airport - rethink)

We checked at the hotel reception desk - "What are some good places to see in Mangalore?". The receptionist swiftly said "Sir ! Mangalore is famous for temples. There are lots of them. However, most of them would be closed at this time. You can visit a beach, if you like". "What is the closest beach", I asked. She said "Panambur Beach. That is just 12 kms from here". "Do you know how much auto wallas charge?", I asked. She said "No sir ! But, in Mangalore, autos go by metered fares. So, you don't have to worry about the fare"  (Also read: Chennai Marina Beach - Free recreation for everyone)

My friend and I checked-out of the hotel, came out to the road and stopped an auto rickshaw. He said, "Sir! You've to pay me 1.5 times the meter fare to get to Panambur Beach. I've to return empty - nobody boards from there to here". We didn't want to bargain/argue in a strange land - especially, without knowing the local language. It took about 20 minutes, to get to Panambur beach.

Panambur beach is located in an industrial area, and close to the Mangalore Port. There were a couple of "coal" factories near the beach. The access to the beach was through a polluted road - the area completely soaked in black by the nearby coal factories. However, we were pleasantly surprised when the auto rickshaw dropped us near the beach. The beach was maintained very well. There were play structures for the kids. They had small gardens in the area. The sand was "crystal clear" and "clean" - no trash, and no dust. There were a few eateries nearby. The beach itself was small. However, there were many people even at 3 o'clock, when the sun was shining bright and hot. I thought we were the only jokers to go to a beach at that time. But, there was enough company for us :)

Some folks were riding water scooters. There were people (government appointed?) to monitor the safety of the folks entering the sea. There were small tents providing shade for the people. We spent nearly 2 hours in the beach. On our return journey, we stopped at the nearby auto rickshaw stand. The guys in the stand demanded 1.5 times the meter fare, again. Their rationale was "Sir ! We aren't from the city. We have to come back to this place empty. So, you have to pay 1.5 times the meter fare". We didn't have much choice and ended up paying 1.5 times fare (Rs.150).

Panambur beach is extremely beautiful. If you are in Mangalore and looking for a place to kill couple of hours, Panambur beach is a must-see.  (Also read: Chennai Marina Beach - Free recreation for everyone)
at December 25, 2010

Email ThisBlogThis!Share to TwitterShare to FacebookShare to Pinterest
Labels: Beaches, Places to see in India