Tirupathi Tirumala Temple visit - May be the last?

We went to the richest and the most visited place of worship in the world, yesterday. People all over the world come to this holy place, to get a few seconds of 'swami darshan'. Extraordinarily rich people come to this temple, with suitcases full of cash (unaccounted money?!) and dump them into the temple Hundi. Yes! After a gap of nearly 10 years, I visited 'Tirupathi'. May be, this is the last time that I ever visit this temple.

We had taken the Tamilnadu Tourism Development Corporation (TTDC) Tirupathi Darshan package. They charged Rs. 1330 (which includes commute, breakfast, lunch, and Rs.300 for the darshan). They picked all the tourists who were assembled near the TTDC office in Central Railway Station, and took everyone to the TTDC office in Chepauk. The tour started at 6.20 am from the Chepauk TTDC office. The bus stopped at around 7.15 am for breakfast. The breakfast was decent enough (pongal, 2 idlis and a vada - limited meals). The quality of food was good. But, the breakfast was served in a not-so-clean marriage hall. 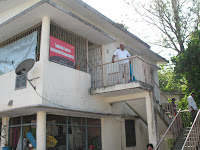 We reached lower Tirupathi by around 10 am. A local AP transport bus (in substandard condition) was waiting there to take us to Tirupati Tirumala. Before the bus departed, the tour guide collected all our mobile phones, cameras and camcorders. It looks like they weren't allowed to be used in the temple. I was quite amazed by the quality of roads that lead to the Tirupathi Tirumala temple. They've constructed a one-way road with 2 lanes, that are wide enough. There are safety gaurd rails on the side of the road that faces downhill. The safety gaurd rails are properly painted in black & white. There were proper road signs indicating sharp turns, bumps etc., I saw a number of jeeps, private cars and even two wheelers that drive up hill, to Tirupathi Tirumala. We reached Tirumala at around 11 am (roughly, 1 hour commute).

The tour guide took us to the place where they do hair tonsure. He said that we cannot go through the 'normal process' because of the long wait time (which would affect the remaining tourists). He charged Rs.90 per person to get a 'quick' hair tonsure, without having to stand in queues (2/3rd of the money went to his pocket & 1/3rd of the money went to the barber). We had to pay Rs.10 to get a bucket of 'free hot water' from a lady servant there.

We were taken to the location where the "Rs.300 queue" starts. There were about 6 halls (actually, cages) in which people were locked. The cages had benches for people to sit. The cages were opened up one after the other. I was expecting that we'll get the darshan, right after the cage #1 was opened. To my surprise, after the cage #1 was opened, we have to stand in queue for nearly 3 hours to get the "darshan". Things haven't changed much in the last 10 years. The quality of treatment for people is still the same during the wait in queues. You are pushed, pulled, crushed, and even scolded. Also, you've to put up with the sultry weather and bad smelling people. My daughter, who wasn't used to such things was crying most of the times. Oh my god ! If god is really divine and has powers to do wonders, why should people suffer this much to see the god (infact, to see just an idol). At the place of darshan, there are volunteers/servants who push devotees (old or young) without mercy. You hardly get only a few seconds of darshan.

After the darshan, we returned back to TTDC cottage (which had 3 small rooms and two bathrooms) for the 65+ passengers. After a short break, we boarded the local AP transport bus. We had to wait for an hour there because one of the families didn't return back from darshan, ontime (we later learned that they went for shopping!). The bus reached down hill in about an hour. We had a good buffett lunch in AP Restaurant, at around 5.00 pm. They took us then to Padmavathi temple. We left Padmavathi temple at about 6.45 pm and reached Chennai at around 10.30 pm.

Though we were able to visit & come back from Tirupathi in a day, it was very hectic. I would not recommend taking the TTDC tour, if you are going as a family (especially, with kids). It is not a pleasant experience, at all. I wish Tirupathi Tirumala Management does something about the 'waiting process' and the unorderly queues. There are lots of creative ways to control the crowd. Considering the fact that Tirupathi is one of the richest temples in the world, they can implement crowd control mechanisms with ease. They have spent lots of money in improving the roads (which results in increased crowd in the uphill). However, they haven't made any significant infrastructure changes that can accommodate the growth in devotees. Hopefully, this pathetic condition changes soon. Until then, Good Bye to Lord Venky.

Email ThisBlogThis!Share to TwitterShare to FacebookShare to Pinterest
Labels: Places to see in India, Temples