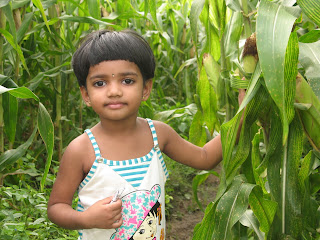 I visited Tiruvengadam, a small village near Rajapalayam, in December. I had been to this village nearly 15 years ago (and several times before that). The village used to be lot more beautiful during my childhood days - with grazing cattle, tiny fishes/turtles in ponds, marching rivers, overflowing wells and last but not the least, the smell of fresh air that traverses through crops and paddy fields. In addition, there used to be lot of people, most of them young.

The village has changed significantly in the last 15 years. The density of youth has come down significantly. Most of them have moved to cities in search of jobs. In addition to farm jobs, there used to be lots of jobs to produce match boxes and match sticks. It looks like those jobs have completely vanished due to the advent of machinery.

Today, the ones who are doing farming are just the old people. The ponds do not have water anymore and are filled with thorn trees. The rivers have just rocks and small pockets of water. The villagers use ground water for irrigation. The water table has gone down tremendously over the years, due to lack of proper rains.

I visited the corn fields and enjoyed breathing fresh air after a very long time. We wouldn't realize it - but, many English words have become part of our every day conversation. I realized it only when conversing with the people in the village. It was tough for me to translate/explain certain things to people.

Government has done a good job of providing the villagers with proper sewage disposal system, electricity and drinking water. Several people carry mobile phones and you can easily see a few mobile phone towers here and there. Overall, I enjoyed my short visit to Tiruvengadam. I'm hoping to go there again for a longer stay, to get the hang of village life.

What can you do to reduce the impact of climate change?
at January 14, 2010