We had a chance to spend a day in Chicago on our way to New Hampshire. We took a Southwes 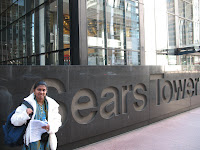 t flight from SJC to MDW airport. Southwest had good deals for SJC -> MDW. The flight reached MDW airport at around 1 pm and it was 2.30 pm, by the time we reached Super 8 Motel close to the MDW airport. We were lucky enough to get a free upgrade of rental vehicle from Hertz. The vehicle also had a navigation device. All the car rental facilities are inside the Airport and it was so convenient. Most of the rental facilities were open late in the night (even at 2 pm).

We spent the whole day in the downtown area. The city is very beautiful. The downtown is garlanded by Lake Michigan. The 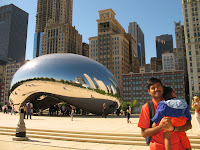 downtown appeared to be busy with lots of financial institutions. You could see people from diverse cultural background. The downtown was clean & also safe for tourists. I didn't see 'strange' folks along the road side. We visited Sears Tower, the second tallest building in North America. We then went to see Union Station, one of the oldest train stations in US. A trip to Chicago wouldn't be complete without visiting the Millennium Park. I was amazed & surprised to see the Millennium Park. The park is in the heart of the city downtown area. It was very crowded even on a working day. You could see school tour groups, tourists, people having their lunch, people who are submerged into their novels/study materials & people who are sitting there and just relaxing. The "Bean" in the park carries the beautiful reflection of some of the nearby downtown buildings. The park also has dining and parking facilities. 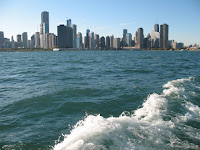 The parking in Millenium Park was relatively cheap (they charge about $18 for 8 hours) when compared to the other nearby parking facilities. We then walked around in the downtown. I saw lots of buses in the Chicago downtown. If you want to spend a few days in the downtown area, you don't even have to rent a car. You can complete your trip with just the public transportation services. Driving in Chicago downtown wasn't very tough (unlike New York 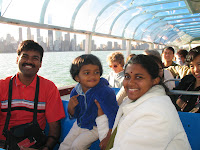 We took a 90 minutes ferry tour, organized by the Chicago Architectural Foundation group. We sailed Lake Michigan to see some of the downtown buildings & the Navy Pier. There are several tour operators near the Michigan Avenue bridge. This tour costed about $22 per person and I felt that it was worth it. There were 100s of people who took this tour every hour. We left the downtown area by around 5.30 pm and drove back to our hotel. We wanted to see the Buckingham Fountain but didn't have the time to do it.

Overall, the trip to Chicago was very peaceful and relaxing.